Crowdfunding with Grant Stimmel and ProductHype

Crowdfunding with Grant Stimmel and ProductHype

ProductHype showcases the best new products on Earth in an absurdly unique way.

Who are you and tell us about ProductHype!

What services does ProductHype Offer?

Who is your ideal client?

What kind of results can you expect working with ProductHype?

What are your best Kickstarter Tips?

Where can we learn more about ProductHype?

Who are you and tell us about ProductHype!

I’ve been the Managing Editor and lead contributor for ProductHype since we launched at the end of 2017.

We had no idea what we were doing and generally sucked at most everything we tried.

But man were those early days FUN.

In October of 2017 we posted our first article.

I’m sure it was very interesting to the 4 people who clicked on it.

But eventually we started figuring things out, seeing what worked and what didn’t.

When you’re first starting out, the stakes are super low.

That’s great because you’re not afraid to try things.

You’re not afraid of turning off your readers because you have no readers.

We had a little over 600 site visitors over our first 3 months, COMBINED.

Our first newsletter literally went out to 7 people (yes, that number includes my own mother).

Obviously we have a long way to go before we get where we want to be, but that success is super exciting to see knowing where we came from.

At ProductHype, we try to keep things really simple for Kickstarter creators.

Our main driver of sales is definitely our weekly newsletter called The HypeSquad.

(You can see a sample of the newsletter here.)

Most crowdfunding newsletters include one sentence about the product and a single image with a link to the campaign.

They shove as many campaigns as possible into every email and do about 3 minutes of prep for each campaign they feature.

For us, it’s all about quality over quantity.

That last part is key.

I don’t care what you’re selling, if you don’t write in an entertaining way, nobody’s going to click.

Who is your ideal client?

Campaigns that have raised at least $100,000 do exceptionally well in The HypeSquad.

We’ve been fortunate to feature 25 $1 million+ campaigns since 2018, and have excellent working relationships with most of Kickstarter’s serial creators.

Like any parent who’s asked which child is their favorite, I’ll have to go on record saying that I love all Kickstarter creators equally.

Buttttt as any parent knows, that’s complete B.S., and I secretly have my favorites.

Bubba and Amber from Give’r are AWESOME to work with.

Dom from SmartHalo rocks as well.

After working with over 500 campaigns, I’ve sincerely enjoyed getting to know every Kickstarter creator we’ve partnered with.

As we look toward 2020, we’re primed to expand into Indiegogo and Amazon to promote popular products on those platforms as well.

What kind of results can you expect working with ProductHype?

We’ll drive anywhere from 2,000-4,000 visitors to a campaign page from a single newsletter feature.

Obviously the more unique a product is, the more our list will engage with it.

I could send 1,000 visitors to a campaign page via Facebook ads for about $10.

(They’d all be from Bangladesh and not speak a lick of English.)

Visitors from a ProductHype feature are highly, highly engaged.

They spend an abnormally long time on each campaign page and convert at a shockingly high rate.

ProductHype brought in over $127,000 in tracked sales for that campaign.

While the newsletter is our #1 sales driver, our blog drives a significant number of campaign pledges as well.

What are your best Kickstarter Tips?

Here’s an interesting fact about Kickstarter… 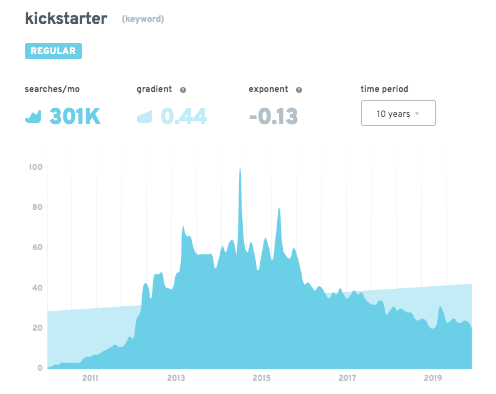 There were a handful of MASSIVE, high profile projects that propelled Kickstarter into the mainstream.

Which is great and all, except for one thing…

Most of them never delivered the product.

(Most notoriously the Coolest Cooler.)

So you’ve just introduced hundreds of thousands of new backers to the Kickstarter ecosystem and then immediately pissed them off.

Kickstarter will never have another chance like that again.

A dedicated community of super backers that make or break projects.

There were 29 design or tech Kickstarter projects that raised over $1 million in 2019.

The days of a Kickstarter project raising $20 million+ are GONE.

So, as a creator, how do you get there?

We put together a list of our 11 best Kickstarter tips.

If you’re about to launch a project, they’re a must-read.

Also, take a look at these fascinating Kickstarter stats.

We take an in-depth look into everything from how long your campaign should run to how much the average project raises to your odds of raising $1 million.

If you’re super lazy like me and don’t want to read those articles, here are our 5 most important Kickstarter tips heading into 2020.

(If you can’t get your friends or family to PAY YOU for your product, nobody else will either.)

(No, your cousin Frank shooting with his iPhone 7 doesn’t count.)

(Nobody wants to read paragraph after paragraph about your Kickstarter product. A picture (or GIF) really is worth 1,000 words.)

(Definitely offer an “early bird” reward. But for the love of God, nobody wants to buy a t-shirt with your company logo on it.)

(It’s really, really hard to be successful if you’re launching your first Kickstarter campaign. But you’ll learn A TON and be in a far better position for your next project.)

Where can we learn more about ProductHype?

For all of its drawbacks, Kickstarter is pretty f*ckin’ cool.

It gives budding entrepreneurs access to an amazing community that they’d NEVER find on their own.

If you’ve been thinking about launching your own campaign, here’s my advice:

You have literally nothing to lose.

And as the old saying goes, if not now, when?

Drop us a line at newsletter@producthype.co and we’ll do everything we can to help you out.

The Story of Nic Jansson and Through the Grapevine

How Mykes Lab started a streetwear project while studying at University